BLOG ARCHIVES
« What the Hail?
Photograph »

One of Calfgrit7’s friends had a birthday party at a new small amusement park. For the party, the kids — 6 boys, 1 girl (the sister of the birthday boy) — road the bumper boats, drove go-carts, and played minature golf.

After pizza and cake, the party ended and most parents and kids went away. CG7 and I toured the huge arcade area. I haven’t been in an arcade that big in years. They had everything from the old classic Donkey Kong and Galaga to new, high-graphic games I hadn’t seen before.

Instead of quarters or tokens, this arcade took swipe cards. You can get a swipe card at the counters or at self-service machines — I used a machine, and I put $10.00 on a card. I figured that would give us plenty of game play even if the games were 50 cents a play.

I quickly discovered most of the games were $1 a play. Well, okay, we’d get 10 games on the card. Calfgrit7 got to drive in a NASCAR race, I flew a WWII fighter plane, and we hunted deer and buffalo together. This was Calfgrit7’s first time playing a shooting video game. I was hesitant at first, but I’d rather him have his first shooting game experience with me than with his little friends. 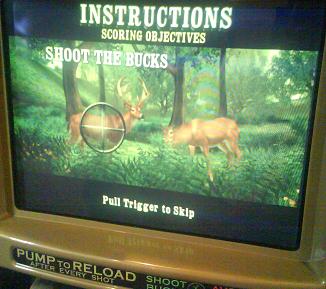 I’ve always had a draw to shooting games; I like to shoot real guns, and I’m a pretty good aim. But arcade shooting games have always been frustrating. The guns are always badly aligned, and my first quarter (or dollar) is always wasted on trying to figure out how the gun is aligned — a game gun’s alignment can vary greatly depending on distance from the screen, closeness to the edge of the screen, angle to the screen. (And sometimes I think they have some random variability.)

We played the hunting game three times, and Calfgrit7 loved it. After the first game, I had figured out the alignment of my gun, and I was racking up the hits and trophies. We chose team play, so my shooting could keep us both in the game for a decent amount of time.

One thing that quietly tickled me about this game was the eye-candy girls that came out on the screen and posed between the hunting rounds. Totally unnecessary for the game, but completely playing to the target demographic (no pun intended). It was a different girl every time, but they all wore the same outfit and held that gun like the plastic prop it must have been.

I would love to have been in the game development meeting where the idea to put these girls in the break scenes came up. How hard or easy was it to convince the producer to allow the extra budget to pay the models and video photographer. I mean, the girls add absolutely nothing to the game play aspect of the program, but they probably do draw in more eyes from male players looking for the next machine to slide a buck in. (Was that a Freudian pun?)

One Response to At the Arcade