My Son is Barney Fife

Calfgrit7 got undressed for his bath, and I checked his clothes pockets to make sure nothing “extra” would get in the washing machine. From one pocket I pulled out a bullet. A bullet.

It isn’t a live cartridge, it’s just a spent and deformed bullet.* It’s sliced in half diagonally, and the bottom is slightly smushed into an oval shape. Looking at in my hand, it’s a right good sized caliber; I figured it might be a .44 or .45, but when I checked in on a ruler, it’s at least .50. Its size, the three rings around the bottom, and the hollow base (not the point) made me think it might be a Minié ball. [I just looked up pictures of Minié balls through Google, and now I’m certain this is such.]

Calfgrit7 was excited when I said it was a bullet. I wasn’t upset or anything, I was just surprised. I mean, we’ve found all kinds of things in his pockets over the years, but I didn’t expect to find a bullet. Especially a Civil War-style bullet. (I don’t expect it’s actually from the Civil War.) He said he found it on the playground at school. Wow. 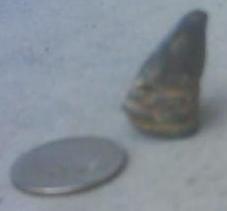 I’m considering taking it to his school office just to let them know what was found. It’s not a big deal in itself, and I don’t expect anything to “be done” about it. But my pointing it out to them might be of use if some other kid finds one or if anything weird or “suspicious” comes up about kids finding bullets on the playground. Who knows, some other kid may find one (one more easily recognizable as a bullet) and show it around to his classmates. I can imagine the uproar that could follow such an event.

Thinking about the potential for things to get blown out of proportion is what makes me think twice about telling the school. I can just see the newspaper headlines, “FIRST GRADER FINDS BULLET ON SCHOOL PLAYGROUND”.

* For those who aren’t familiar with guns and bullets, a bullet is the lead projectile that comes out of the gun. By itself, with no powder and no gun, it is no more dangerous than a small rock.

One Response to My Son is Barney Fife