Note: the below is an overview of how the adventure went. I’m leaving out a lot of little details. 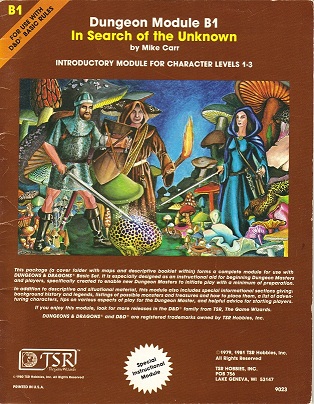 With freshly equipped PCs on paper in front of the Players, and the dungeon module in front of me, we started the adventure off standing before the front door of the dungeon. They tapped the door with their 10’ pole, the thief checked it for traps, and they listened at it before opening it.

They entered the dungeon, and began walking down the corridor, tapping ahead of them with the 10’ pole as they went. In our years together before this game session, we have all gabbed about classic D&D dungeons. Like me, one of the Players is a veteran of such dungeons, way back. So they brought their paranoia, caution, and patience with them into this delve.

The party reached the first pair of alcoves along the entry corridor. They 10’ poled all around the area, then moved on. When they came to the second pair of alcoves in the entry corridor, they decided to search for secret doors – but only one character searched each alcove. I guess they weren’t real serious about it. But my rolls came up with them finding the secret door to the west.

Before they could do anything with their discovery, two wandering berserkers found them and attacked. I forgot that I’m supposed to roll for the monster’s reaction instead of just attacking, but what the hell? We play D&D for the excitement of battling monsters, not talking to them. (This is my after-the-fact excuse for forgetting to roll reactions throughout the adventure.)

I would say this was my first BD&D combat since circa 1982, but I pretty much ran my AD&D1 combat by the BD&D rules. This is probably the main reason I think back on my AD&D1 campaigns as easy and smooth to run, compared to if I had used the complicated AD&D1 combat rules as written. I ran my BD&D/AD&D1 hybrid up through the mid-90s.

Although, I don’t think we ever really ran our old-days BD&D combats in the Movement-Missile-Magic-Melee order. We just let the PCs do all their stuff without ordering in the MMMM pattern. But for this game session, I was trying to run everything honestly by the rules as written. So we did movement, then missile fire, then casting spells, then hand-to-hand rolls, in order, on the winning side of initiative, then the same for the losing side.

In this battle, the fighter engaged the berserkers in melee, the thief shot his bow from 20′ away, and the cleric and magic-users hung back out of harm’s way. The fighter killed one enemy, and the thief killed the other. No PC was injured. But:

A flaw in old school modules, in my opinion, is the incomplete way they write up monster stats. For instance:

For some monsters, that’s information enough – orcs, goblins, and other basic monsters. But, for example, berserkers get a +2 on their attack rolls against humans and “human-like” creatures. I didn’t notice that little nugget until I looked berserkers up in the rule book, after that fight was completed. One berserker missed hitting the PC fighter by one point –- that +2 would have made the attack a hit.

The module stats for troglodytes and giant centipedes also leave out important combat information: stench and poison, respectively. After the berserker mistake, I opened the rule book before each combat to check for such missing info.

Now, I think monster stats in contemporary published adventures is information overload – far more info than is necessary for a combat. Although some people like/praise the bare-bones stats given in classic modules, for me, stats that omit important combat info aren’t a good thing anymore than stats that fill half a page with a wall of text.

In this battle, that little piece of omitted text made a difference in the result.

Then the party set about opening the secret door. After opening it, they spiked it to keep it open. They didn’t know it, but that was a good idea, as the door is a one-way valve, and they wouldn’t have been able to come back through it later if it closed.

Shortly after moving down the new hallway, I told them their torch was running out. It was also time for me to roll for another wandering monster check.

The Player whose PC was holding the torch joked and fiddled around, pantomiming holding the torch as it burned low. After several seconds with no one saying they were lighting a new torch, I said it went out. Darkness. “You might be eaten by a grue,” I said. That got chuckles all around.

My wandering monster roll came up with four giant rats. I described the party’s new torch lighting up, revealing the rats right on them. “Check for surprise,” I instructed. They were surprised. Uh oh.

The rats bit at the fighter and thief, and hit the thief for 3 points of damage. The thief only had 3 hit points, so he dropped dead. After the fighter killed two of the rats, the other two failed morale and fled. The cleric and magic-users again just stayed out of the fight.

First PC death in the second battle, just 8 turns into the adventure. The thief’s partner PC, one of the magic-users, picked up her brother’s body and carried it while the party moved on through the dungeon. (That M-U had 15 strength –- should have been made an elf.)

A couple turns later, the party came upon a giant centipede on the other side of a door. The party won initiative, and the fighter killed it in one blow. This encounter isn’t really worth mentioning.

The party continued their walking through the corridors, still probing the floor with their 10’ pole all along the way. They were wandering around in the maze area of the dungeon (the south west corner). They eventually made their way all the way around and up to the back door of the kitchen (area #2) (no other wandering encounters). They were keeping a map of their trek so they wouldn’t get lost.

They entered the kitchen and looked around (I had not placed a monster or treasure in this room). They gave the dead thief a burial by fire in one of the cooking pits. After that, they opened the front door of the kitchen and found the remains of a battle in the dungeon intersection (not really area #1 marked on the map, but described there).

They carefully examined and searched the bodies, finding and taking the small change on a couple of the dead adventurers. After this, they decided to back track some to check an area of their map that didn’t fit right (simple mapping error in the triangular hallway around area #10).

During this double-checking of the hallways, a pair of orcs wandering up and attacked. Again, the PC fighter tanked while everyone else hung back from the danger. But then the fighter took a 5 point hit, taking him down to 2 hit points. Uh oh.

One of the magic-users cast magic missile at one of the orcs, for 2 points of damage (orc had 4 hit points). The cleric stepped up to fight, but got immediately cut down by an orc. Second PC dead. With the cleric down, and the fighter hurt bad, and both orcs still fighting, another magic-user pulled out his big gun: sleep. 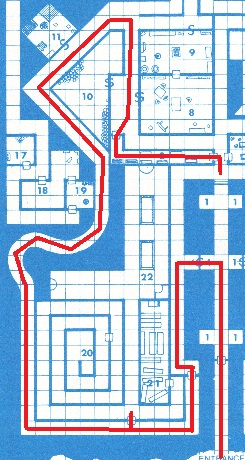 hecking the sleep spell description, I got a big surprise. There is no area of effect listed for the spell. No instruction at all about this. Really? So I ruled that it just affected everything around the caster (but not including the caster). The Player rolled and got 10 hit dice of effect. Everything, including the PCs fell to sleep (no saves for this). The victorious magic-user then killed both orcs with his dagger, and woke his comrades.

The Str 15 magic-user (who hadn’t cast anything yet – detect magic not being a combat spell) carried the fallen cleric as the party made their backtracking way through the maze area to get back out of the dungeon.

Along the way, a wandering troglodyte attacked them. It scored 3 points of damage on one of the magic-users (who had 4 hit points), and then the fighter killed it in one swing. I was lenient here and used a D&D3 concept — the troglodyte only took one attack when it moved up (trogs usually get claw/claw/bite).

They continued their hurried escape and got out of the dungeon.

41 total turns in the dungeon

only 1 room discovered (but no monsters therein)

and 2 PCs dead (from one hit each)

The 4 surviving PCs got something around 30-40 xp each. Not a very exciting reward for someone’s first time experiencing Basic D&D.

If you are familiar with the layout of this dungeon, you will recognize that the PCs (through no fault or mistake of the Players) managed to take the most boring route through this dungeon. I don’t think I could have intentionally plotted a better path to completely miss rooms, set monsters, and placed treasures.

Upon returning to town (I handwaved everything after exiting the dungeon), they healed up, rolled up two new PCs, restocked torches, and headed back into the dungeon for another go.