The next PC lineup:

Note: the below is an overview of how the adventure went. I’m leaving out a lot of little details. 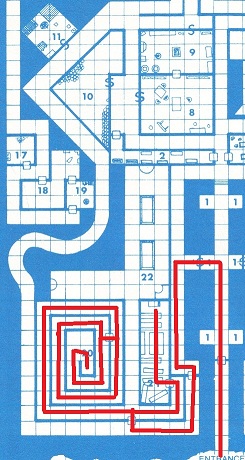 The PCs re-entered the dungeon, walked up the entry corridor, and again opened the west secret door (the spike holding it open was gone, now). They followed their previous path part way, and then went through a door they had only opened and looked beyond before.

They ended up in room 21 — the meeting room with lots of benches — but it was empty of monsters and treasure. They spent a lot of time searching around in there, but there was nothing to find.

They left that room and walked back the other direction, going round and round the spiral, until they came to the center, where a single ghoul was waiting to pounce on them.

I was looking forward to this ghoul encounter. Three attacks and paralysis — I knew it was going to make things interesting. But:

Round one: party wins initiative. Fighter kills ghoul with one shot. Combat over.

<sigh> Using the stats in the book, the ghoul only had 6 hit points even though it had 2 hit dice. But at least I placed some treasure in the ghoul’s “nest.” Among the module’s treasure list is a silver mirror and a crystal goblet.

By the book, the mirror is “of exceptional quality” and valued at 90gp, and the goblet is 15gp. Because I wanted more treasure in this adventure, I upped the values to 400gp and 250gp respectively.

The module text doesn’t give the mirror a size, so I, just off the cuff, described it as two feet by three feet (thinking of a mirror hanging in our home). The Players discussed the treasure and figured it was unlikely these fragile treasures would survive dungeon exploration and combat, so they decided to take them out of the dungeon. I don’t blame them — this was their first real valuable treasure. They didn’t want to take the chance of loosing the gold and xp.

So the party backtracked their way out of the dungeon. It was almost 11:00 at night, so I called the game session at that point. We all gathered our gaming stuff and got up from the table to move to the living room for our regular after-game gab session.

The subject came up that we might try D&D 4th edition next week. There was a couple of mentions that this Basic D&D game session had been fun, but I could tell no one was really excited by the game. It seemed to be an interesting game to try, but not interesting enough to continue.

I don’t really blame the Players for feeling that way. I mean, it was bad luck that they ended up spending all their time basically just wandering the bare halls of the dungeon. In an email a few days later, one of the Players asked if the dungeon had any set monsters and treasure, or if it was just a big dungeon with wandering monsters.

It’s a big dungeon with pre-set monsters and treasures in specific rooms/corridors. There are almost 40 rooms on that first level of the dungeon — you found 3 of them. Through no fault or bad decision on your part, the direction you went through that secret door (which is a one-way door, so it was good for you that you spiked it open) took you to the “maze area” of the dungeon where it’s mostly just long corridors and random wandering monsters. Bad luck.

Had you discovered and gone through the secret door on the other side of that entry corridor (or gone straight ahead), you would have found lots of rooms with set monsters and treasures. Bad luck.

I had spent a couple of hours reading over that module, deciding on and placing monsters and treasures, and through just pure bad luck, they encountered one placed monster and treasure.

Well, at least I didn’t have to describe a lot of rooms to them — finding and reading room descriptions from the wall of text can be difficult. This is a problem I have with many old classic modules — back before boxed text came into use. Check out this typical page from B1: 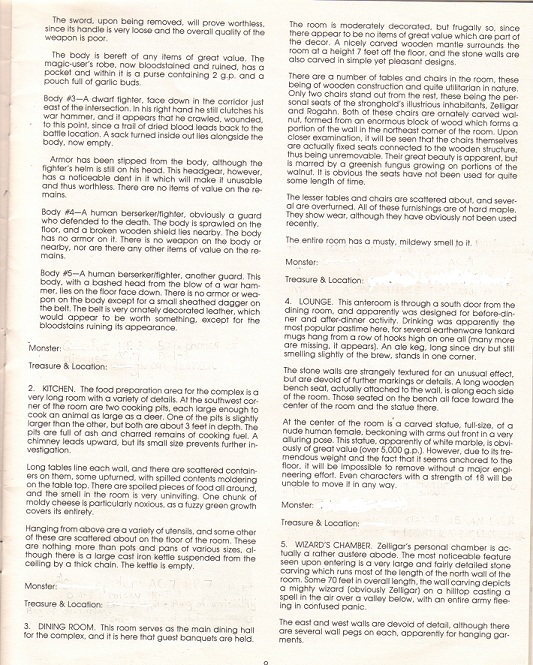 So I’m disappointed. Not in the game or in the module, but just that my first (and now probably only) chance to run a Basic D&D game for my group turned out so relatively boring, just because of the direction through the dungeon the PCs ended up taking (through no fault or mistake on the Players’ part). I would have loved to play through the whole dungeon — I see, now, that’s really the only way to get a true feel for classic D&D. A one-game session shot just isn’t enough.

Although, had the PCs gone a different way, and discovered some of the rooms and monsters and treasures, I’m sure the Players would have been excited enough to continue another game session.