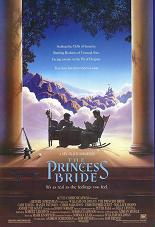 I had seen bits and pieces of this movie through the years, and much of its dialogue is well known among fantasy role playing gamers.

“My name in Inigo Montoya. You killed my father. Prepare to die.”
“Inconcievable!”
“I do not think that word means what you think it means.”
“Never bet against a Sicilian when death is on the line.”
“He’s just mostly dead.”

But I had never seen this from beginning to end. So I rented it, and the wife and I sat down to watch it together.

The beginning, with a grandfather reading the book to his grandson, sets the understanding that the tale to unfold is completely a self-admitted make believe story. The low-budget look of the costumes and special effects actually support this movie’s light-hearted feel. The corny names, like the title character’s name, Buttercup, and Prince Humperdink, all lend an air of a fairy tale. Although it is not a Monty Pythonesque comedy, it’s a fun tale not meant to be taken too seriously.

It never made me laugh out loud, but it kept an entertained smile on my face through the whole hour and a half. The occasional interrupting scenes, at intense moments, with the grandfather and grandson reaffirm the undestanding that the story is being told rather than happening.

All in all, this is a very happy movie. It’s fun, entertaining, and watchable for the whole family.