BLOG ARCHIVES
« Chaos Running Amuck
Time Is Not On My Side »

Categories: Best of the Blog, Movies 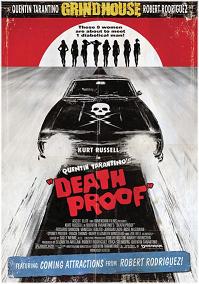 I couldn’t finish watching this movie. From the DVD front cover image and the back cover text, I expected an exciting action movie. But what it proved to be is a chick talky flick with 60 seconds of action — uninteresting action. Granted, I stopped watching after an hour and a half. If there was more action at the end, I missed it.

I know the movie is supposed to be an homage to (or parody of) the 70s low-budget, independent, grindhouse flicks, so the editing “errors” didn’t bother me. But, if it’s supposed to be like the old 70s cheap flicks, it shouldn’t have 2000s pop culture and tech in it. The cell phones and text messages and such really felt out of place in this story. But, I could have overlooked the anachronisms had I been given the mindless action I expected.

Another odd thing was the decent acting, especially by Kurt Russell. I mean, I thought the whole concept of this movie is to recreate the feel of the cheap 70s grindhouse flicks, with bad editing, bad filming, bad acting, and all. But Tarantino gives us the bad editing, some bad filming, but good acting, and 21st century props.

And then there was the story. The first 45 minutes are just girls talking about . . . nothing. When Kurt Russell showed up, I thought, “Okay, here we go.” But he just added to the talking for another 15 minutes. Yes, the dialogue and acting is good, but it’s about nothing. I was completely bored. Nothing interesting was happening. Nothing.

Then there was the 60 seconds of car crash, and then a couple minutes of talking about it.

Afterward, we go back to another group of girls talking about nothing. I thought, Oh my god, you have got to be kidding me. I don’t want to listen to another hour of this pointless chit chat. I stopped the DVD at this point and just put the disk back in the case.

I intended to ask Blockbuster if they give refunds for crappy movies, but I forgot when I got to the store, and I just dropped the movie in the outside return slot. Maybe the movie got good and active at the end, but I really don’t want to sit through 105 minutes of boredom so that the final 15 minutes feel exciting.