A friend sent me this link to a site about tattoos. I’m not a tattoo kind of guy (much to my mother’s relief), but I can appreciate skin art — especially when the art is comic book super heroes.

This tattoo, though . . . part of me says, “way cool,” but another part of me says, “yuck, disgusting.” I like the Spider-Man aspect of it, and the ripped flesh looks realistic. But unless you’re going for an intimidation factor with the tattoo (like if you’re a Hell’s Angel, or something — and I don’t think they’d let a Spider-Man geek into the club), I wouldn’t think a guy would want to get a tattoo that could turn off a woman seeing his bare skin. I mean, most guys would like for a woman to want to see his bare skin (so he could claim a fair turn to see her bare skin, yes?). But flesh peeling off your chest doesn’t exactly whisper, “Come lay your boobs on my body.”

But then maybe the guy with this tattoo is looking for a specific kind of woman: one who likes ripped flesh and Spider-Man — a rare combination, I would think. Personally, I’d be wary of exposing my skin (especially any particularly tender parts) to a woman who liked ripped flesh.

Now, the liking Spider-Man woman, I could love. Cowgrit likes Spidey — she used to read my SM comics when we were dating and I was collecting them. Spider-Man 1, 2, and 3 are the only super hero movies she’s gone to see with me. If I were getting a tattoo, I could see getting a Spidey small logo or mask on my arm. (No, Mom, I’m not thinking about getting one.) 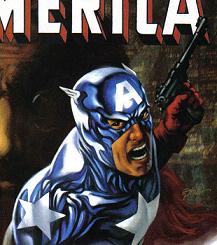 I saw Captain America #36 on the rack in the local Border’s book store. The cover image showed Cap with a gun in his hand. This is so wrong.

If you don’t know, Captain America (Steve Rogers) died in the comics world (Marvel comics) last year. It was big news at the time, and I blogged on it. I predicted he’d come back. (I don’t know what happened with the Captain America series to reset the numbering. CA was well into the hundreds when I last read it, but this is issue #36 — that’s just three years of monthly publication.)

I picked up this issue just to see what they’re doing with this new Cap, and to see if a “Captain America with a gun” was as bad as I suspected it was. The whole concept of Captain America using a gun is completely antithetical to the character of Cap. Steve Rogers didn’t use a gun — he didn’t kill.

The new Captain America is James “Bucky” Barnes, the former young sidekick of Cap back in WWII. I know very little about James/Bucky because he was long “dead” before I picked up on Cap comics back in the mid 80s, and he hadn’t “come back” until long after I stopped regularly reading Cap comics in the late 90s.

New Cap is not as good a fighter as Old Cap, and he’s apparently very willing to kill his enemies. I don’t like him. In this one issue alone, New Cap shoots three bad guys (but none of them die). Now, this is not the first time someone with less morals (or mental stability) wore the Captain America uniform, so I’m not going to get all up in arms about this current situation — I just won’t buy another issue with this Cap’n A. This is not my style of Captain America.

I predicted (with no particular wisdom) that Cap would come back. The uniform has come back, but I don’t count that as fulfilling my prediction. The last page of this issue shows what looks like Steve Rogers in some kind of stasis chamber. This starts the fulfilling of my prediction. When Steve Rogers is wearing the red, white, and blue suit again, I’ll say, “Captain America is back.”

I had heard a few comments referring to World War Hulk (WWH) a couple months ago, and it sounded really interesting. I looked into the Marvel comics event to learn the set up: who did what, why, how, and such. I learned what happened to the Hulk to make him go to “war”:

Fearing the threat he posed to humanity, Earth’s most powerful heroes shot Hulk into space.

Landing on a faraway planet, Hulk became an Emperor and fell in love.

But the shuttle that sent Hulk away from Earth exploded, killing millions of people, including Hulk’s queen and the baby growing inside her.

Filled with rage, Hulk and his Warbound warriors have set coure for Earth, to bring revenge upon those he holds responsible for destroying his world.

I picked up what I think is the first Incredible Hulk issue concerning WWH, #106, and read it. Hulk is not actually in this issue; this issue is about She-Hulk and Amadeus Cho. (I’ve never before heard of this “smart kid”.)

In the opening scene of this issue, Iron Man/Tony Stark easily infects She-Hulk with some “nanobot power inhibitors” that removes her big, green power. They reduce her to normal. My very first thought at reading this was, “Why didn’t they just do that to Hulk?”

I’ve since bought a few more issues of the WWH story: a total of three Incredible Hulk (IH), and two Iron Man (IM). Trying to follow this story is reintroducing me to something I really hated back when I was regularly collecting and reading comics: storylines that flow through numerous different titles.

In IH #107, you see the Hulk engage Iron Man, but then the story cuts away. A few pages later, Hulk is apparently done fighting Iron Man; obviously Hulk won the fight, but the action is not shown in this book. There’s no mention of what to buy to see the fight—I’d love to see Hulk beat the crap out of Tony Stark.

The cover of IM #19 shows Hulk’s fist knocking the head off of Iron Man, so I figured this is the action that IH #107 skipped. Inside, they eventually get to the Iron Man/Hulk battle. (Tony’s in his Hulkbuster armor.) Iron Man injects Hulk with the nanobots he used on She-Hulk—why inject? (He didn’t inject She-Hulk; he just snapped his fingers in her face.) But apparently the nanobots didn’t work on Hulk. IM #19 ends with Hulk starting to smash the Hulkbuster armor.

So I picked up IM #20 in hopes of seeing the end of the fight. But nope. The fight is over, and Tony is a prisoner aboard Hulk’s space ship. Is the fight wrap up shown in another title? I don’t know, because there’s nothing in any of these books directing the reader where to go for the next part of the story.

This is something that at least the old multi-title crossover stories gave the reader: notes on what book to get for the next part of the story. This WWH story is frustrating. IH #108 is about Rick Jones and one of Hulk’s new Warbound buddies from space. No Hulk action.

At the back of IH #108, there’s a checklist for the “Roadmap to World War Hulk”. Thirty-seven books from May to October. It’s unfortunate that this list is given in the September issue of IH. It would have been more helpful had it been in the May issue of IH, #106.

I’m actually loosing interest in the story now, because after purchasing five books, the story I’ve seen has so many holes (not plot holes, but missing pieces of the story), and is jumping around so much, that I’ve lost focus. I’m lost as to what is happening. I really hate this kind of comics series. It’s hard enough for the casual reader to pick up a series; the publisher shouldn’t make it a scavenger hunt to follow a single story.

I’m let down, disappointed, and very frustrated. Marvel won’t be getting any more of my money for this story.

My 6 year old has illustrated and written almost a dozen comic books. His first was a couple years ago. He used Spider-Man stickers for the characters, but he actually drew the cityscapes and the webs shooting from the sticker- Spider-Man’s hands. He then dictated the text to his mom who wrote it at the top of the pages. He has loved Spider-Man since he was about 2 years old—last year was the first year since then that he didn’t dress up as Spidey for Halloween.

Then he moved up to drawing everything, characters and all. As he’s learned to read and write some in Kindergarten, he’s been even writing his own text. By his sixth birthday, he had four or five comics to his credit.

In the past few months, he’s been interested in the Captain Underpants novels by Dav Pilkey. It’s a hilariously silly series, and he laughs out loud every time we read one of the stories—even the ones we’ve read half a dozen times. In these novels, George and Harold make comic books about Captain Underpants, and sell them in their school yard. My boy took this idea and ran with it. He’s made about six Spider-Man comics with the intention and expectation to sell them to his friends. 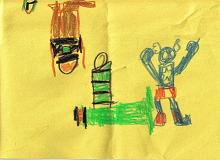 His love of comic books came from his love of Spider-Man; he knew of Spidey before he knew anything about comic books. It was because of his obsession with Spidey that I bought him a couple comic books. I read the books myself before reading them to him, to make sure the 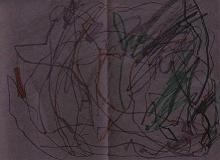 story and images were suitable for a 3-6 year old. We’ve read them and he’s looked at them so much they’ve come apart. I’ve collected the separated pages and keep them stored in my comic collection boxes.

He’s seen my boxes of comic books, and knows I have a huge collection. He occasionally asks me when he’ll be able to read them. I’ve told him, when he can read them, he may read them. I also reserve the right to hold back on that “may” until he proves he can read them carefully. I haven’t saved these books in plastic sleeves, with cardboard backs, in long, specifically-sized boxes to let a kid (my son or not) accidentally tear or bend them. I’m a bit obsessive about taking care of books—comic books, game books, and regular reading books. (I even have a well-maintained, full set of my 1977 World Book encyclopedias that I refuse to let my wife throw out.)

So far, he’s proving that he wants to take care of books. He takes care of his personally-created comic books. It upsets him when his 2 year old brother gets a hold of them and scatters them about the house. He’s coming along nicely as an obsessive comic book geek. Makes a daddy proud.