Sex, Drugs, and Rock and Roll

The boys were in bed and Cowgrit and I were snuggled up on the sofa spending some together time watching VH1’s Greatest Songs of the 90s. Cowgrit and I met

and dated in the early 90s and spent our DINK* days in the late 90s. So some of the songs highlighted in the show brought nostalgic thoughts to our minds.

Most of the songs and commentary on the songs were “G rated”, but then came mention of Third Eye Blind’s top hit, Semi-Charmed Life. Cowgrit and I both liked the song, as it has a good upbeat tempo and happy feel, although neither of us really knew the lyrics. I thought the song was about having a mundane, mediocre life, and wanting more. Boy, was I wrong. 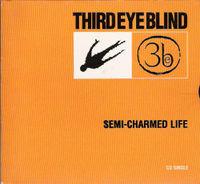 The commentators on the show said the song was about heavy drug use, wild sex, and “lots of really wrong, wrong things,” to quote one guest. Cowgrit and I were surprised. Another guest said, “it’s about doing crystal meth and having sex.” And that’s when we noticed Calfgrit7 standing at the hallway.

I fumbled around for the TV remote and managed to turn it off before any more enlightening commentary could be spoken. How long had he been standing there? How much had he heard? How much did he understand? Oh boy.

We got him back to bed, and he never said or asked anything about what was on TV. If he grows up to be a druggie, sex-crazed, pervert, we’re going to blame VH1.