We dressed Calfgrit3 in some warm, loose-fitting pajamas with a button-up top. He looks real cute in those PJs. The next morning, he came out of his bedroom missing his shirt and socks. We figured he got too warm or something.

The next night, we put him back into those pajamas. The next morning, he’s out of his shirt and socks again. Okay. Calfgrit7 often doesn’t wear a shirt or socks to bed, so we figure CG3 is just copying his big brother. (CG7 is hot natured, and his sheets and blanket are enough for him at night.) 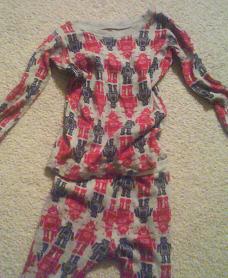 The next night, we put CG3 in different but similar pajamas. The next morning he comes out of his room in completely different and not similar pajamas. He’s wearing tight PJs with robots on them. We already know these are his favorite, but we’re just learning how favorite.

He’s never put on his pajamas all by himself. Usually, I or his momma help him by at least holding them up and open so he can step into or stick his arms into the clothes. But he not only put them on by himself that night, he did it in the dim glow of a nightlight.

Then yesterday, his momma put him down for a nap in the middle of the day, in his clothes, like always. When he came out of his room an hour and a half later, he was in his robot pajamas. Nice. He apparently got out of bed, took off his clothes, put on his favorite pajamas, and got back in bed to sleep. You gotta give the little guy credit: he knows what he likes, and he handles it himself.