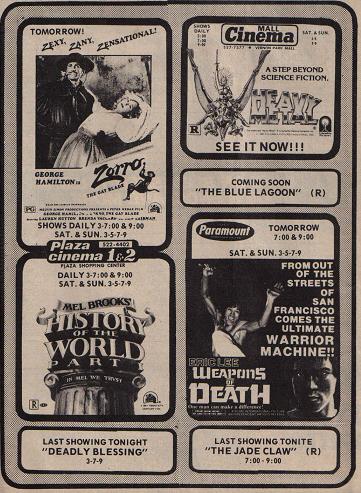 Helping my mom clean out some old stuff from her attic, we found some old newspapers. (One as old as 1918.) There are some interesting articles in these rags — interesting from the angle of “what was going on in the world and town way back then.”

The Paramount and the Park Theater were old-style theaters — one screen, velvet red seats; the Paramount had a balcony, and the Park had mirrored foyer and restroom hall. Neither theater lasted out of the 80s.

The Mall and Plaza theaters were more contemporary for the 80s — dull and boring. They both lasted through the late 90s, but they’re both now churches.

Of the movies shown in the newspaper listing, I saw Zorro the Gay Blade and Heavy Metal in the theater. I saw History of the World on TV many years later. Weapons of Death, I’ve never seen. Of the others mentioned, I think I’ve seen at least part of The Blue Lagoon, on TV many years ago. Deadly Blessing and The Jade Claw don’t sound familiar.

I don’t remember anything about this version of Zorro other than I think I thought it was funny at the time. I remember parts of Heavy Metal and I remember those parts as interesting enough that I’m considering renting it to watch again. History of the World is a beautiful Mel Brooks classic that I remember many parts of.

I considered adding some quotes, here, from History, but the ones I can remember are slightly vulgar or rely on visual gags.

Although all these listed theaters are closed now, there is a new theater in my hometown — it opened this decade — but the couple times I’ve been to it have been disappointing. It looks all modern and good on the outside, but the inside is not as advertised, and the employees are slack at their duties. But then, I’ve been spoiled by the grand theaters in my current home city.

One Response to Old Movies