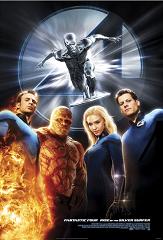 This movie is decent entertainment as a comic book movie. If you are used to comic books, and like or at least accept, the genre conventions, you can like this movie. Although, if you are a stickler for movies from comic books to exactly match the comic book story, you may hate this movie. The story is definitely not the comic book story of the subject. But really, its a hour and a half movie, not several years worth of monthly books. There has to be some reworking of the tale to get it to fit the time and medium.

As for the acting, the cast does well in their roles. They each convince me they are Reed Richards, Ben Grimm, Johnny Storm, and well, it’s really not Jessica Alba’s fault she doesn’t seem like Susan Storm to me. Alba’s acting is fine, equal to the other three stars, but she just seems too young and much too beautiful for how I’ve always seen Sue in the comics. I’ve never thought of Invisible Woman as a hot babe; she should have had a more subtle beauty, probably even a few years older. I thought Ioan Gruffudd had Reed Richards’s gray sideburns in the first Fantastic Four movie — they are missing in this movie. I wonder if they were removed to keep Gruffudd from looking too much older than Alba

I went to this movie fearing it would be bad. I mean, how can they introduce an intergalactic plot and characters like the Silver Surfer and Galactus without all the comic book history. In the comics, other planets are known, alien beings are known, and a world-devouring being could fit in the grand Marvel Universe. But with only one movie before this one, the baseline hasn’t been set beyond our real world knowledge. In the trailer, it is said, “Everywhere this thing goes, eight days later, a planet dies.” With the baseline of real world science, how could we know this? The only known planets beyond our Solar System are light years away; our knowledge of those planets are years late.

But, the movie just mentions other planets, and we are to accept this knowledge. I didn’t have a problem accepting the knowledge, because I know of the comic book universe. But movie-goers who don’t have that background probably will be surprised and confused by such mentions.

As a comic book geek, but not one who insists on movies absolutely sticking to the comic story and history, I enjoyed it right up until the final “confrontation” with “Galactus”. I put those two words in quotation marks because it really isn’t much of a confrontation, and it definitely isn’t Galactus. This ending disappointed me because I saw how well they actually managed the Silver Surfer character and plot, and so I came to expect to be pleased with how they might handle Galactus. Too bad they couldn’t add another 5-10 minutes and give us something more satisfying.

There is a short scene right after the first few lines of credits, but there is nothing to see at the very end of the credits. So don’t bother waiting.