My Distraction and Addiction

I know I said I was going to get back to writing on this blog. I had every intention to do so when I said that, but I’ve gotten into a new computer game that has really given me a lot of enjoyment. So much enjoyment that it’s become a bit of an addiction.

Team Fortress 2. It’s a multi-player first person shooter with two teams (RED and BLU) who not only try to kill each other, but try to accomplish various goals in a match. Capture the flag, control points, move objects from one location to another, etc.

I played Team Fortress Classic a lot back some 12+ years ago. I remember the hype and anticipation for Team Fortress 2 back then, but somehow it fell off my radar for all these years. Then a guy from my work organized an online game night, and TF2 was what we played. Within a few minutes, I was hooked.

In the past several weeks, I’ve gotten pretty good at the game. Each team has up to 12 players, and I regularly end up in the top three scorers by the end of a game. (I usually play the Pyro, if you know the classes.) 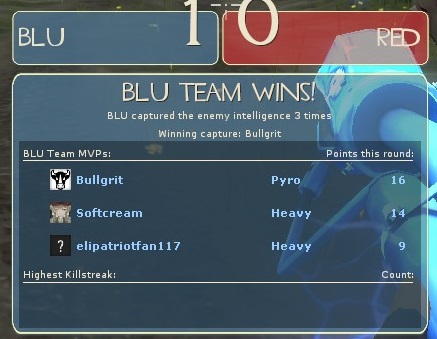 But I’ve got to cut back on my play time a bit. At least enough so I can write some more. I have to reign in my ego boosting some so I can get some actual work done.

My life has gotten so busy in the past several months. I mean, just crazy. I often go two or three days where I don’t even get to sit at my computer at all, much less get the time to write a blog post. There’s no one thing that has changed to make our life so busy, it’s just all of everything. For instance, I’m squeezing time in right now between reloading the laundry machines and putting Calfgrit10 to bed and hustling Calfgrit14 into the shower. I’m skipping my usual workout tonight because I’m just exhausted from the weekend. Weekends are supposed to be a time to rest and recuperate from the work week! But mine seem to be when I have to try to catch up with everything that I couldn’t get to during the work week.

Every evening when I get home from work, there’s dinner to make, homework* to help with, cleaning or neatening to be done, a new dog** to train and walk, errands to be run, and a dozen little issues*** to deal with. It takes both me and Wifegrit both to keep this house and family running.

Every day I think of something I want to blog about, because I enjoy writing, and I enjoy relating my life experiences from being a dad, a geek, and a Southern good ol’ boy. But before I know it, a week has passed and I didn’t get a chance to sit down and write anything. So many interesting things to tell, so little time to tell it. And it bothers me to let this blog sit idle and stagnate for a week or two at a time.

Where this blog used to be a creative outlet, a pleasurable pastime, it’s now become a stress because I feel I’m failing to accomplish something. Every day that passes without me writing another post irks me. Really, it deep down bothers me.

So I’m going to just stop for a while. For how long a while, I don’t know. But I have too many plates spinning in the air right now, and I have to give up on at least one. This web site is more a luxury, or a hobby, than a needed thing.

Right now, as I’m writing this, I find myself wanting so much to go into detail on even just one or two things, but not having the time to do that is the whole reason I’m writing even this much.

There is no emergency or tragedy in our lives right now that is taking my time. It’s just normal life. Just normal, chaotic, crazy, whirlwind life. I’d say I need a vacation, but that would just put me behind catching up on what needs to be done.

* Homework: I have to relearn math that I haven’t work with in 20+ years. Then I have to teach the math to CG14, (because he doesn’t learn it while actually in class for some reason), and then I have to check his homework to see that he’s done it correctly.

** Dog: Yep, we have a new dog. A wonderful, happy, fun dog that we all love very much. But she needs training and exercise regularly.

*** Little issues: A drawer isn’t closing properly, the wi-fi is down, a toilet is clogged, a phone charger is missing, the washer is making a banging noise, etc., etc., etc.****

**** For example: My FTP software is not working, so I can’t upload images for this site right now. This has been a problem for weeks, but I can’t sit for more than a few minutes at a time to figure out the problem and resolve it.

P.S. If you want to read something, check out my Best of the Blog posts:

Like most kids, our boys write a Christmas wish list every year. We’ve saved a few of the lists, and I’m looking back over them tonight.

I hope I have been good and deserve these toys.”

I have been a good boy this year.”

The lists of wishes look very similar through the years, even between the two boys: Pokemon, Lego/Mega Bloks, Star Wars, Nintendo Wii games, etc. The earliest list we still have is from our oldest back when he couldn’t write more than his name. The intro and list is in my handwriting, with his name signed in his handwriting. This is the only list with just general wish ideas:

After that first list, the wishes become very specific, (below exactly as they wrote with their own hand :-)

And now, with our oldest son being 13 this year, (turning 14 next month), we’ve noticed a big difference in his list. The items have gone back to being a bit general, but much . . . different:

My favorite of that list is the first one: money. Right to the point. And it might be cheaper for us to just deliver two or three or four hundred bucks in cash than to gift the other items on the list, (other than the one game).

Calfgrit13 has known the secret of Santa Claus for a couple years, now. I explained it when he expressed strong suspicions, I think based on hearing his friends talk about the subject. Now Calfgrit10 is starting to express suspicions, but we’ve managed to hold onto the secret for at least this one more year. Big brother understands, and next year little brother will have to learn: Santa only comes to kids who still believe. This is why CG13 has helped us maintain the magic for CG10.

Wifegrit will be heartbroken when there’s no one left in the family with a true belief in Santa.

Don’t be a Bully

In this age of the Internet, like many parents, I’m concerned about what my children get exposed to online. But I’m also concerned about what my children may do and say online. Whether it’s in a text message, on a discussion forum, in YouTube comments, or over the microphone while playing Xbox, I don’t want my children to become bullies, jerks, assholes, or douche bags. Being a regular consumer of various Internet sites, I’ve seen many, many, many bullies, jerks, assholes, and douche bags. There is something about anonymity plus an audience that makes people become horrible, terrible monsters. It actually saddens me.

A while back, while surfing YouTube, I saw the thumbnail of a video with the title, “World’s Ugliest Woman.” I didn’t click the link or view the video because that whole concept — labeling and showing someone like that — just isn’t something that interests me. I’ve seen enough of the Internet to know how cruel people can be to anyone.

A couple weeks ago, I saw a photo of some famous soccer player with a very, (abnormally), skinny woman. The title of the photo just had the athlete’s name and the woman’s name. I didn’t know either of them, so I checked the comments to see if someone explained who they were. Of course there were many cruel comments about the woman, but fortunately there were also some explanations of who she was. She was the woman from the YouTube video I mentioned above. Her name is Lizzie Velasquez, and she’s a motivational speaker.

This intrigued me, so I went back to YouTube and looked her up. She has her own channel, with many videos — both personal vlogs and her motivational speeches in front of large crowds. She is amazing. I’m a big fan of TED Talks, and I found she has a couple of her own. Watch this 12 minute speech:

After seeing this, I watched some of her other videos including her personal vlogs and some TV appearances, like on The View.

Her attitude is wonderful. “You can choose to be happy, or you can choose to give up.” Even listening to her chat off the top of her head in her vlogs is inspirational and motivational. She is so full of happiness to the point of even being a bit silly, rambling, and playing with her hair, that it makes me smile. She is a joy to watch.

Last night I introduced my family to Lizzie Velasquez. I brought up her TED talk on our TV and showed it to Wifegrit and our boys. Both my boys are pretty normal for 10 and 13 year olds. They could use a little inspiration/motivation, (especially the teenager), but my main goal with showing them this video was more to teach them against bullying.

I wanted them to hear about, and see and understand, how bullying, (both online as well as in person), affected a real person. I wanted them to hear, in a victim’s own words and voice, how much it hurts. You can hear Lizzie’s voice tremble a bit when she talks about it. You can tell it still bothers her. But she has risen above it, and she is a champion now.

I told my boys that I know them well enough that I don’t think either of them would ever be cruel to another person. But I explained how sometimes their friends may say something mean to someone else. And sometimes communicating on the Internet, with its disconnection and anonymity, lures good people into doing and saying terrible things. I explained that I want them to understand how being mean can really hurt someone, even online. Real people are at the other end of our words, whether we speak them or write them, and whether we can see the other person or not.

Also I want them to understand that sometimes they may meet or see someone who looks very different than they expect, but those persons are still human beings with feelings and hopes and dreams and hearts just like their own. I want my boys to have empathy for others. I think Wifegrit and I have taught them this already, and I think both boys do understand, but Ms. Velasquez’s speech really shows and explains this eloquently and personally.

I am so impressed with this woman. She is a beautiful person. I am so glad I found her videos.